“I have gone out with a guy a few times and on the last time, he said he would call and didn’t, what gives? Why do men not call when they say they will?”

Probably one of the most persistent behavioral questions that looms in  the dating universe for women is why do men not call when they say will? Or more succinctly stated: Why did this motherfucker not call me when he said he would😡?!?!?

It is conversationally expeditious and easier to avoid awkward confrontation for a man people by moving the end of the social interaction along by saying you will carry on at a later time, vis-a-vie he will call you, etc. People do this ALL the time. It isn’t a unique problem just in dating. Have you ever been to a networking event and gotten stuck in some boring ass conversation with Ned from accounting? Yeah – you do whatever you can to wiggle out of that one.

Some dating gurus out there may chalk it up to a guy simply being a ‘coward’, this however, while having some raw truth from a certain vantage point, ignores the fact that men and women in our society are raised (hopefully) to be kind to one another and to not hurt others feelings intentionally. Can you imagine being in kindergarten and you tell Julie she smells like B.O. and you find her annoying? How do you think that would go over? You sitting over there in the corner in a big ass dunce cap is how.

Not to get all sciencey about it, but as a species, humans excelled in the animal kingdom by working together and you accomplish that by trying to mitigate confrontation whenever possible. The intention isn’t to lie but to avoid confrontation. But yeah – let’s face it, the guy is attempting to exhibit social grace and spare your feelings being a coward. Fuck him, right? 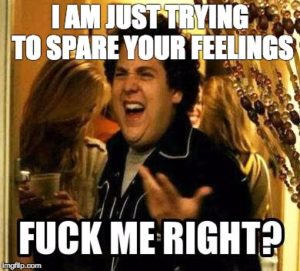 HE JUST ISN’T THAT INTO YOU

It’s cliché and overused feel-good rom-com expression, but – there are books written about it – He just isn’t into you and all that anti-male, en vogue  jazz. The truth of the matter is both sexes sometimes just aren’t into/motivated enough by the other potential partner to move the ball down the field sometimes. You go out on a date and there isn’t just enough excitement stirred that motivates one party to give up an evening of bingeing Netflix. You could spend a lifetime twirling your hair in deep thought contemplating why they aren’t into you, but the truth is, it doesn’t matter and people’s real motivations are as varied as types of hummus.

I know it may be shocking that some men act out solely out of their biological instinct to procreate, but it does happen. If a guy isn’t forthright about this being his sole intention and knows your only intention is being in a committed relationship, it is indeed a dick move. However, more likely, is he is open for more if the situation were to present itself, i.e. your sexual chemistry is on-point and you set a blaze his masculine fire and feelings of want. More likely still though, is he is too young, immature and trying to produce as many notches as possible and you haven’t locked down your raw feminine energy and no-nonsense bullshit meter either. This is okay and part of being in your 20’s, getting jaded and settling growing up. If you are reading this in your 30s and 40s though….yikesss. Drop that deceptive Peter Pan like yesterdays garbagé. In conclusion, some guys may not call back if they are only interested in sex and they feel you may be too much effort. The point is to not get discouraged over it and be thankful that you weeded out someone who isn’t interested in the same long-term stuff you are.

WHAT’S THE TAKE AWAY? BE HAPPY AS FUCK

Yeah – as the above topic subtly hints at: Be happy as fuck. I know experiencing the guy not calling you back can be a shot to the gut, and for some, reading the aforementioned about the male psyche may also be equally as frustrating, but if we put on our grown up pants for a moment and practice a little ZEN, we can also realize that weeding out undesirables that don’t give a shit about us early on is a HUGE coup de tat in the dating game. It saves you energy, money, time investment, and sanity. So I implore you….that the next time a dickface guy doesn’t call you back, instead of wasting your mind and resources ruminating on it endlessly, becoming that angry emotionally damaged chick that sends shivers down my spine – that instead, say THANK YOU. The universe has done you a solid and opened up opportunity for someone more worthwhile and is on the the same page as you. Win.