Or as one of my friends likes to say: “The egg never chases the sperm”.

On a basic animalistic level, men like to chase and to feel like the woman they end up with is a prize that no other man could have won. Likewise, we women want to be pursued, but the issue is we also like an element of the chase too. And this is where the problems usually arise – when the balance between being pursued and chasing is completely off. If you find yourself initiating texts, trying to pin him down for a date and constantly stressing about whether he’s into you, it’s time to reassess your strategy and stop with the chasing.

So how can you get him to want you and only you? Here’s how to make him chase you: 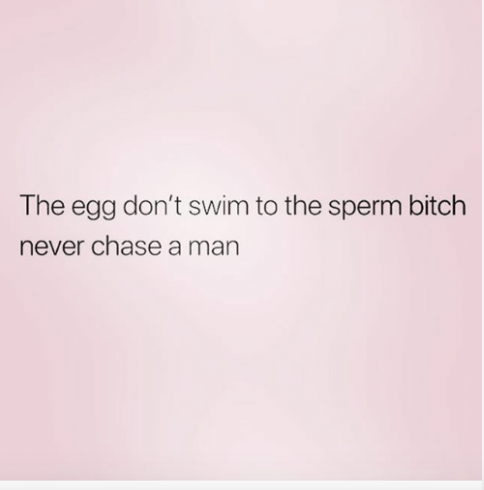 Get in touch with your feminine energy

I’ve always been aware that I have quite a masculine energy. Not that I look masculine, but I have always inherently been a “go getter”. I am an achiever in all aspects of life, which means when I want something, I want to go out and get it. I’m like a dog with a bone. If I like someone, they will definitely know about it.

Unfortunately with dating that doesn’t always work. Sometimes it’s better for a woman to be indirect and a little more vulnerable. Embracing your feminine energy is about letting the guy feel like a man and letting him take charge of the situation. And if he’s taking charge, then it usually means that you have to step back and be a little more agreeable.

Wait for him to take the lead

While there are situations where it is possible to ask a guy out on a date, as a general rule I would say let the guy take the lead. Especially on the first couple of dates, let him ask you out and choose the restaurant. If you swap numbers, try to let him text you and initiate conversations. Of course, sometimes the guy might need a little nudge to know you’re interested. Sometimes it also depends on the guy. I have spoken to some men who say they’d really appreciate a girl asking them out or making the first move, but it’s best to assume they’re in the minority. If you feel like he needs a little encouragement, try to guide him in the right direction and let him take care of the rest. Generally, if a guy likes you he will have no problem going after you.

Remember, you don’t know him yet

We all do it. We meet a guy and then within 5 minutes we’re fantasising about all the vacations we could take together and envisaging what our kids would like. It’s OK to have some excitement but remember you don’t really know him yet. It’s important not to project all of your hopes and dreams onto this one person and try to make them “fit” your dream life. Remember that you barely know anything about him, so this is your time to just “wait and see” and get to know each other.

Yes he may be successful, smart and ridiculously good looking but that’s no reason to put him on a pedestal. He could be all those things but not necessarily into you or compatible with your personality. Everyone has flaws, so don’t ignore all your instincts and assume that he is perfect!

Don’t be a text gnat

If you’re always the one to initiate the conversation or you feel like you’re texting him and you’re not getting much of a response, stop right there. No guy likes a text gnat. The more you text him and get frustrated, the more he will back away.

When dating guys I have found that the best thing that works is silence. Whenever I’ve felt upset with a guy or felt like they’re not texting me enough, I simply stop texting them. Sometimes if you give the guy a little space and back off, he will come back texting you more than ever. Suddenly he wonders where you are, what you are doing and why you haven’t text them in a while. It’s basic human psychology.

So, step away from the phone, before it’s too late.

When my friend started dating her boyfriend she used to tell him she was busy, even if she was really just at home wearing a face mask and watching TV.

Now, I’m not suggesting you go to this extreme and I wouldn’t encourage playing games or telling white lies but, it’s always good to have a busy life. Have hobbies, go out with the girls, make plans and pursue your career goals.

Many girls think they need to do all these hobbies to impress a guy. Not true. The point is you should be doing these things for you in order to have a happy and fulfilled life. If you have too much spare time on your hands then it’s easy to start placing all of your focus on a guy. If you’re at home twiddling your thumbs, then it’s not long before you start obsessing over whether he’s going to text you back and when you’re next going to see him.

There was one time a guy cancelled plans on me last minute.

Now, if I hadn’t had much going on, I probably would have got really annoyed with him cancelling and scolded him for doing so. But because I was so busy that week, I was actually relieved that he cancelled. I said “No worries, I’m actually exhausted myself” and we made an arrangement for another day.

See how it makes a difference?

So, ladies. Live your life to the fullest, for you. If a guy sees you’re cancelling plans with your friends just to make time for him and bending over backwards, he’s going to see that you’re too available. By being a bit less available, you keep him on his toes.

Avoid investing in him too soon

Did you know that “giving” actually increases your emotional attachment to someone? The more you do for them and the more you invest time in them, the more attached you feel and the more you expect in return. If you’re a people pleaser, it’s tempting to start doing things for the guy quite early on.

A friend confided in me that she has been dating her guy for four months but he has no time for her. He’s always busy and has to work and she’s lucky if she sees him twice in one month. He makes excuse after excuse about being busy, yet she is baking him cookies for the office and buying him hand towels because she noticed he doesn’t have any in the kitchen. In her mind she thinks, “If only he could see that I can be really good for him!” So she invests more time trying to convince him of her girlfriend capabilities.

When in a relationship, most guys would appreciate the small gestures. But the point is they’re not in a relationship and he’s not putting in any effort towards her. Dating is a two-way street, so if he’s not investing the time or effort, neither should you. Mirror his actions if you want him to start chasing you. Get him to do things for you and he will start to feel more invested.

Don’t sleep with him too soon

In the early stages of dating, a man is usually just looking to get laid. He starts out looking for sex and sometimes he accidentally finds love and a relationship.

We live in a modern society and there’s no issue with having sex on the first date. Sometimes a random hookup can turn into a relationship. But you can’t hold it against him if, after having sex, you discover that’s all he wanted – sex.

So many women sleep with a guy and feel like suddenly he owes her something. They get upset that a guy could sleep with them and not follow up for a second date.

If you’re a woman who can have sex with a guy and not expect anything, then great. But if, like most women, you feel all that oxytocin running around your body and feel attached after sex, then it’s best not to have sex too soon. If you want him to chase you and you ultimately want a relationship, it’s best for him to get to know you first.

Be confident and sexy

Men like happy, confident women. When going on the first few dates, leave all the complaints about your boss at home. If he compliments you, accept the compliment. If he tells you you look beautiful, just say “thank you” and don’t argue that he’s wrong. Flirt, be seductive and talk about the positive things going on in your life. Imagine it like a job interview – would you get the job if you started talking about how everything sucks and you’re not that great? Leave the emotional baggage for when you two know each other a lot better.

Be ready to cut that guy loose

OK so you’ve played it cool and let him take the lead. But if he’s only texting you once in a blue moon and you feel like he’s not really giving you his full attention or time, then you have to be prepared to cut him loose. If a man can sense that you will have no qualms with walking away, he will instantly see you as being a woman of higher value. Sometimes you have to prepared to cut him loose at the first sign of him disrespecting your boundaries. If the guy isn’t meeting your standards or stepping up to the plate, then there’s no point complaining, it’s on you to walk away.

1 thought on “Don’t Chase Him: How to Make Him Chase You”